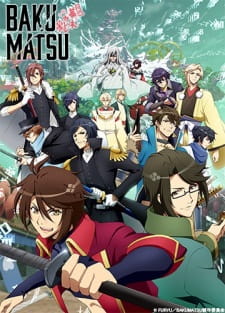 Bakumatsu is an anime about the consequences of changing the (real) flow of time and how power can take away the best part of good people. It’s also about learning from the mistakes and don’t repeat them again. We can see it in the relationship between the disciples Katsura, Shinsaku, and the master Shouin (Mugensai).

Note: Bakumatsu refers to the final years of the Edo period when the Tokugawa shogunate ended (from 1810 to 1867)*.

More importantly, the anime talks about a crucial moment in Japanese history. While describing in a fictional form about Meiji Restauration (1866 to 1869), the anime present some important historical characters as the protagonists.

Takasugi Shinsaku and his fellow Katsura Kogoro were relevant names in this period and they fought in favor of Meiji Restauration. This period begins, at the moment a part of Japanese aristocracy realizes the need to “modernizer” their country, as Ryuyma Sakamoto explains in a flashback.

In the anime, the main strategy to create “an interesting world” is the assimilation of military strategy from western. This is pretty clear with Mugensai presence. However, other characters mentioned an alternative plan, it was the strengthing of Emperor authority. We can see the way in which the Emperor is all time confined in his room and his communication with the external world occurs indirectly by letters and thanks to his spies. However, the anime only suggest the secondary effect of that plan: the weakening of the samurai system. This is the disappearance of samurais, as one of the consequences of Japanese commercial opening to western culture. It occurred because the Emperor needed to concentrate real power in his hands, including military force. Another reason is the necessity of “modernizing” the strategy, weapon, and structure of the military.

In this context, Yoshinobu Tokugawa also was a real person. He was the last lead of shogunate to resist and, at the end of some conflicts, he transferred his military power to the emperor. This fact we don’t see in the anime since it ends in the middle of the process of dismantling of the samurai system. Hijikata, a member of el Shinsengumi (a paramilitary-police force located in Kyoto), will fight against those changes in the second season, as the last minutes suggested.

About the construction of characters, I think there was any significant development. All of them started and finished the series on the same page. The exception is Hijikata, who realized the unhappy future of shogunate and, possibly, will take the place of Mugensai as the villain of the next season in order to save his own perspective of future.

For a hero, Shinsaku is really stupid. However, I really liked the last episodes when he faced the truth about his master and had to decide on his own what was the best decision to create his “interesting world”. Katsura provided all good ideas for all plans in this anime. All the other characters had – more or less – only figurative presence. The Shinsengumi, Emperor, Seimei were there because they were part of the history (in a historical sense) but not because they really changed the facts. So, it was quite frustrating. The fights could have been more explored. They could have shown more about the suffering of Kyoto people under a despotic power. There were ideas, but none of them were displayed and, this is why the anime had a very plain plot. However, most of the questions reached a conclusion, so it wasn’t an illogical show.

Go Back Couple is starred by Jang Na Ra and this should be reason enough for many viewers (including me) to watch this drama. I will try to review this drama fairly.

I hope yo enjoy this review!

END_OF_DOCUMENT_TOKEN_TO_BE_REPLACED

I wanted to share some words about “My Only Love Song”, after I finished this minidrama.

END_OF_DOCUMENT_TOKEN_TO_BE_REPLACED

In this blog, I will write about movies, series and animes. Follow me!